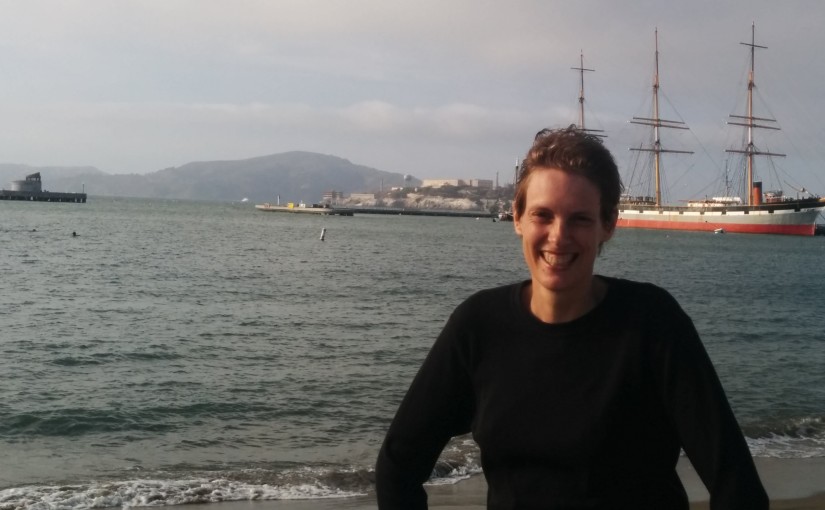 The summer of 2014 saw me doing a lot of swimming. Near the end of the season I found myself surfing the internet looking for a cool race to do next year (this was before I was convinced to sign up for Ironman).

That definitely fits into the *cool* category.

I researched some events, but then I didn’t think about it for a couple of weeks until a post on my Facebook feed caught my attention:

“We are doing this Alcatraz swim, anyone want to come?”

Hang on, I looked at that event. I had been on the fence about entering, but if my friends were going… I signed up immediately.

Alcatraz has a storied history. On an island off the San Francisco coast, as a Federal Prison it was considered inescapable and housed some of the most notorious criminals in history. Today, it stands empty, preserved as a National Park and museum.

Of course, there were some escape attempts. Most notably that of June 11 1962, immortalised in the movie, Escape From Alcatraz. Under the cover of darkness, three men, who had spent months digging through the walls of their cells, attempted escape on a raft fashioned out of old raincoats. The jury is still out on whether they actually made it; the official line of course being that they drowned.

Since then there have been many attempts to prove that escape could have been possible, and of course, the swim has been completed many, many times. Tides and currents have been studied to allow optimal conditions and plenty of boat support would be provided to ensure that even if a swimmer got off course and missed the entrance to the swim bay, they would not be swept under the Golden Gate Bridge and out into the Pacific.

Even so, I was nervous.

The swim, isn’t actually that long. Only about 2.5km. However currents mean that sighting is very important.

Also, I would be swimming in the ocean, instead of my comfortable lake. The expected temperature was 12-16 degrees Celsius, and there would be waves, and salt, and…animals?

I started swimming in the lake early in the season, to accustom my body to the cold water. Unfortunately (or fortunately), I had lost some weight whilst simultaneously training for Ironman (Hooray!), but that meant less insulation in the cold water (not-so-hooray). Temperatures I had swum in easily last year left me shivering.

I also discovered that the Bay is in fact an estuary, meaning it is fairly shallow (relatively speaking) and has a lower salt content than the surrounding ocean (could have fooled me!). As such scary man (or woman) eating sharks don’t like to go there, so I had only to be concerned of ‘littler’ bottom feeding sharks and the odd sealion.

So that’s fine then, nothing to worry about.

And so, two weeks after Ironman, I found myself catching an eye-wateringly early flight to San Francisco, with my friend Leora. Ashley and Meagan arrived shortly after us, and James and Phred travelled separately with their families. We called ourselves Team JailBait, and we had had shirts made up and had found some awesome prison themed bathing suits online.

We spent much of Thursday and Friday playing tourist. I marvelled at the hills, which changed from block to block. Who in their right mind would decide to build a city on such terrain? We visited the Crookedest Street, a one block hill, with 8 switchbacks on its steep gradient. Then, as we walked towards Fisherman’s Wharf, we got our first glimpse of Alcatraz Island.

It doesn’t look too far…

A walk through Ghirardelli Square and a ride on the famous San Francisco Cable Cars rounded out Thursday.

On Friday, I met Phred at the Dolphin Club, and old Swim club right on the beach. We took a swim in the swim bay, a sheltered area, setup for swimmers. The temperature seemed OK. It was 18 degrees Celsius – unusually warm. I had brought my wetsuit with me, just in case my last minute test swims indicated that going ‘naked’ might be too dangerous. A second swim later in the day, this time with the others, sealed it. I would likely be cold, but I probably wouldn’t die. I then switched back to tourist mode, with a city Duck tour, and a trip to Alcatraz Island (the others had tickets for a different boat). The tour of Alcatraz was fascinating, and I totally recommend it to anyone visiting the area. I stood  and looked back at San Francisco. I would be swimming that in less than 24 hours.

It doesn’t look too far…does it?

Saturday dawned, and I dragged myself out of bed to my 4:30am alarm. We took a taxi down to Fisherman’s Wharf in the half light, where we picked up our packages and had our numbers written on our hands (probably for identification should we drown). The sun came up as we waited nervously. Finally it was time to walk to the boats.

The boat ride was quite quick and soon enough, we were being told to jump off the sides of the boat and make our way to the start line (a row of kayaks).

Suddenly I was terrified.

What was I doing?

But there was no turning back now, not with Team JailBait all standing there!

With some last minute encouragement from Ashley (Thanks!) I jumped. It wasn’t too far, maybe six feet to the water’s surface, where I immediately began swimming, both to keep warm and to avoid being jumped upon.

I paddled around near the start, trying to keep warm. Happily, I bumped into the rest of my teammates and began to feel much better. The sighting information had been a little unclear at the briefing, so we chatted about where to aim for, before the boat horn sounded the start.

I started off fairly well, nice and steady. Aiming a little to the left to combat the current. I didn’t dare look back. The city didn’t seem to be getting any closer and I was fearful that I might not have pulled away from the island at all. Every so often I would get hit by a sudden swell (which I was later told might have been caused by the massive container ships plying the area). When this happened it would throw off my stroke, I would get a mouthful of water and be left coughing and spluttering, trying to stay afloat whilst I regained my equilibrium.

It felt like forever and there were a couple of times when I genuinely thought that I couldn’t make it. I was cold and tired, and I was really struggling to swim through the waves. Eventually, the seawall seemed to inch a little closer; I realised I had aimed a bit too far to the left, so I adjusted my course accordingly.

Reaching the wall, I was relieved – nearly done.

I still had to make my way into the bay and get to the beach. But at least now I was pretty sure I could make it. I pointed myself towards the tiny finish line and slogged on. As I reached the beach I looked up at the clock – over an hour!

It was with a mix of relief and disappointment that I made my way up the beach. My friends were waiting to cheer, and they soon banished my frustrations.

I just swam from Alcatraz!

We headed off to warm up and get breakfast and I rounded out my San Fransisco experience with a Segway tour (so much fun) and a bike ride over the Golden Gate Bridge.