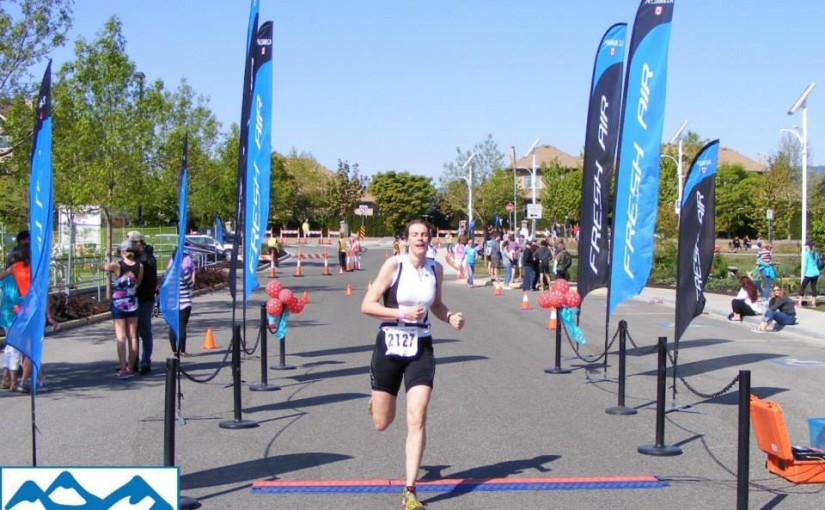 It’s been a bit quiet on the blog recently, as I’ve been very busy working and training. I did however manage to squeeze in a couple of races this spring…

I nearly didn’t enter this event. The main event is a half marathon and the 10km event always feels a little “tacked on”. Pay almost as much to run half the distance…and we didn’t even get medals like the half marathoners did!

Now, I know many seasoned runners will scoff at participation medals, but the child in me still likes receiving a medal as I cross the finish line. Rationally, I know that they have only the value which the recipient places on them, but the chances of my gaining a medal for placing in my age group are currently slim to none, besides, they are a nice memento…and so shiny!

Anyway, in a last minute decision(and I do mean last minute, as in five minutes before registration closed on race morning) I entered my second 10km of the year. The last one, at Lavington had gone really well and I hoped to improve on that.

I knew how I wanted to run this race – for the first time I had an actual race plan, and it didn’t include ‘pray to reach the finish line…’

I was going to start out a bit slower, but steady. The course was in a familiar area and largely outa and back so hopefully no surprises. From the mid-point, I planned to strategically pick up my pace and if all went well finish fast and strong.

Suddenly we were off, before I even had time to turn on my GPS. Far from starting slowly I allowed myself to be carried along by the crowd and started way too fast. As the field thinned out I fell into a more appropriate pace.

1km, 2km, 3km…Being only at the 2kn mark no longer fills me with dread.

Just keep going – I know I can do this.

Finally, the turnaround point – 5km. Half-way and I’m feeling good. I checked my pace, it was slightly under my goal at 6:30/km.

I began to cautiously run a little faster. 6km, 7km I kept running, trying to go a tiny bit faster at each marker; chasing what I was sure had to be a negative split (a second half faster than the first, much sought after by runners everywhere).

That last kilometer was one of the longest of my life.

Keep running, the finish line must be just around that corner…

OK, probably the next corner

Just as I was beginning to worry that I had overestimated my abilities for this final stretch, I made one last turn and the finish line came into view, one last push and I was done: 1:02:44 PB!It was gratifying to know that I was able to successfully create and execute a race plan; I was able to listen to my body and adjust accordingly. This is a big step forward both in fitness and from a training and performance perspective.

My second triathlon of the year, this is a fun local event. Last year at this event, it was cold and rainy; it was also the day that my ankle started hurting, which lead to the summer off with that stress fracture, so I was hoping for a better outcome all around this year.

It didn’t start out well. This race takes place about 5 minutes walk from my house, so predictably, (certainly for those that know me, incredibly not so much for me) I was running late. I was still in the line to pick up my timing chip when transition was scheduled to close; this left me rushing to set up my transition area which didn’t help my nerves at all.

I headed to the pool deck for the pre race meeting, to see that the pool water had been dyed purple for the occasion, which I thought was a rather cool touch; that was until I jumped in for a warm-up and realized how disorienting it was, and how much visibility was reduced. It was quite surreal.

Happily I got used to it quite quickly and thought the swim didn’t feel very fast, I completed it without incident. After a quick run through the parking lot I was out on the bike course.

The bike course consists of three laps, with a timed hill climb each lap. I had already thoroughly accepted that there was somewhere between zero and a snowball in Hells possibility of my winning the hill climb, so I had decided to simply try to maximize my lap times rather than wearing myself out unduly in that one area.

On lap one I passed another cyclist, but I couldn’t stay ahead of her, I was going just too fast to stay easily back out of the mandatory draft zone (12m) but not fast enough to pass and make it stick. We passed back and forth a couple of times before I finally began to draw away slightly on lap two. I felt incredibly slow, but just kept going.

After my third lap, I headed out confidently on the 5km run. Last year by this point I couldn’t feel my feet, they were so cold, but this year the weather was perfect. The run went well, nothing spectacular, but a good strong effort and I came across the finish line smiling.

As it turned out, my race was almost nine minutes faster than last year; I had improved in every area. Clearly some of this improvement can be attributed to the increased temperature and also the absence of a stress fracture. Nevertheless, I was happy. My ‘slow’ swim was 30 seconds faster, I gained 4.5 minutes on the bike and almost 3.5 on the run.

All in all, it was a totally uneventful race: nothing went really wrong, no unexpected surprises, no insecurities about my ability to complete the distance. The internal monologue just confidently said “You can do this, no problem”. I feel that this really opens up possibilities for improvement now that the majority of the basic skill and fitness level has been achieved.

My third spring event was a half marathon. The PLAN event is very small and in many ways could barely be called a race. I entered at the last minute with a couple of friends.

As the course was explained at the start I noted that most people were doing 5km or 10km. There were only a handful of 1/2marathon bibs, maybe 10 or 15. A small field.

The familiar refrain kicked in: LAST

Oh well, I would have to deal with that if it happened.

The course was simple: go 5km up, turn around, pass the start/finish and go 5.55km, turnaround and come back. All on the Greenway, a packed gravel trail.

I had already considered a race strategy for the occasion, it mainly centered on going slowly for the first half and then speeding up in the second half, hoping for a negative split. I planned to run 10minutes/walk 1 minute.

As they counted down the start, I turned on my GPS: first newbie mistake…

My GPS was programmed to show speed (kilometers per hour) rather than pace (minutes per kilometer).

This left me running along, trying in vain to calculate the required speed to maintain a 7:30 pace (the answer of course being 8kph-easy when you are sitting in your living room, for some reason, nigh impossible for me to calculate on the run).

Anyway, I kept running, trying to go slow. I knew the number should be under the 9.5-10kph I was currently doing. Everyone was passing me.

Everyone is passing me…and I’m not even going slowly enough!

Of course, most of the others were going less distance and could therefore afford to run faster. After and alarmingly short time, no-one passed me anymore.

It’s happened, and I’m only 3km into the race.

The only thing to do was keep going…so I did.

My mind was wandering, but I just tried to keep running consistently. I even caught up with a 10km runner for a little while before she pulled away from me, never to be seen again.

As I neared the turnaround, I began to see runners coming back.

Maybe I wasn’t as far back as I thought?

My heart leapt, but I soon realized I was not as almost there as I was being lead to believe. I soldiered on sadly.

I crossed the bridge which I knew was close to the turnaround, I wondered if anyone would notice if I turned around here…

Except me of course, I’d always know. I kept running to the turnaround cone.

Then out of nowhere, two runners appeared.

I stayed with these ladies for about the next 4km, when they started inching away from me. Now I knew I was last. I just tried to keep them in sight.

As I came through the finish line at the 10km point, I looked at the clock:

I kept running. This leg of the race was interminably long. The leaders passed me on their way back. Finally the second turnaround came into view. It was unassuming, just a little sign, not even a volunteer guarding it.

Great, just over 5km to go then. Slightly uphill of course.

I headed back. As far as I could make out, I was probably going to miss my 2:30 goal, but I did seem destined to finish at least. I lost sight of the other ladies some time ago, I’m on my own.

Just at the lowest point of the race, my good friend Kay appeared with her partner, cycling up behind me. This was just the boost I needed.

She informed me that I was looking good and strong and almost there and she would see me at the finish. (It’s great to have friends who are good enough to lie for you!!).

A few minutes later she returned to tell me that the two ladies were actually quite close ahead of me and I could probably catch them.

I focused on running strong and consistent, and sure enough, those ladies appeared and I was reeling them in, oh so slowly. I wasn’t sure how much longer I had or if I would pass them, but I realized that it didn’t matter after all. I was going to finish, and finish strong.

As it turned out I did catch them, and pass them. I kept running. The finish line had to be close now. Just keep going. Jeanette, the friend I had started this race with appeared about 1km from the end and ran in with me. As I came to the end, and the clock came into view, I squinted to read it.

I raced for the finish, racing that clock, ticking towards 2:30.

And I made it.

I could not have been happier.

At Disney I had finished in 2:37 and I was very happy with that. This was faster, but I feel like there were a few areas with easy (ish) potential for improvement, not to mention this race was on gravel trail which is harder anyway, so when all was said and done, a very positive performance.

I feel great going into the summer season. Stay tuned.