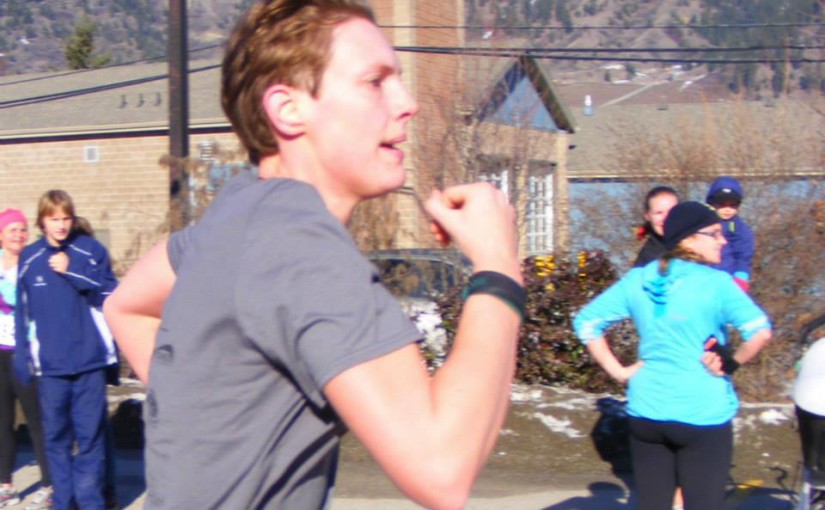 After the success of my Christmas runs, I didn’t really run for about six weeks. I could feel the shin splints beginning to rear their heads a d so I focused on cycling to try to maintain running fitness with a lower risk of injury.

The Lavington 10k is the first race of the Interior Running Association season. It is a beautiful course largely in the middle of nowhere, mostly flat bit with a few rolling hills. It seemed like as good a time as any to kick-start the 2015 season. The interior running Association is made up of local club runners, a slightly faster field than the more ‘generic races I usually partake in.

When I woke up that morning, I looked out of the window to try to ascertain the weather conditions, which would inform my clothing choices.

I decided to throw a couple of different options into the car as I headed out to the race. After checking in and getting my number (and waiting in an incredibly long bathroom queue), I still didn’t know what to wear. It was very cold, but the sun was starting to peek through, so after much indecision, I opted for a T-shirt but long pants and gloves. It was risky, but I hoped it would warm up quickly and thus eliminate the need to carry a sweater for much of the race.

Right from the start, the field swarmed past me. I was ready for that, I had decided to start off slow, but still, as I looked back, there didn’t seem to be many people left.

Coming last is a constant worry for me, particularly in smaller, faster races; but I pushed it to the back of my mind and focused on maintaining a steady pace.

I saw the 1km marker.

Great, just need to do that nine more times…I can do that.

People were still passing me. I seemed to be running so slowly.

As if to underscore this point, at that moment, my friend Markus came past me, congratulating me on my ‘marathon pace’ as he did so.

This should be 10k pace!

Wow I really am slow.

Nevertheless, I ran on. I needed to maintain a good marathon pace for Ironman, so if today I couldn’t manage a 10k pace, I would make it practice for that.

Just need to do that four more times… I can do that.

I kept running, people kept slowly passing me, but my pace felt nice, my heart rate was good, this was sustainable.

Just need to do that three, no, three and a bit times… (OK, I admit that little piece of math stumped me as I ran on).

Around this time I started to get a stitch. This was interesting as I haven’t really had that problem since I learned to run seven years ago. It wasn’t too bad though, I could still run, but it wasn’t going away.

4km took us into the shade of some trees, I briefly wished I has gone with long sleeves, but after about a kilometre (which felt like forever), we emerged back out into the sun (such as it was) again.

Then the stitch really kicked in. I tried all of the usual stretches, massaging, poking and swearing, none of them seemed to work. I wondered how much faster I would be able to go if I could breathe properly. That 3km was pretty miserable actually.

Luckily by 8km it was beginning to fade, there was light at the end of the tunnel.

I began to zero in on a single runner ahead of me and slowly (oh so slowly) catching and passing them. The slower pace at the start beginning to pay off. As I came close to the finish I kicked up my speed a notch.

I came to the final turn, about 25m to go. Someone yelled that I would be under 65 minutes.

“He must be talking to someone else, I’m not that fast”

The next thought tumbled in:

“It doesn’t matter who he’s talking to, we started together, I’m under 65?”

There was one more person between me and the line.

I could hear my friends shouting my name. If I had had even three more paces I would have passed her, but it wasn’t to be.

My final time was 1:03:37 a full six minutes faster than my last 10km race. I obviously wasn’t going as slowly as I had initially feared, perhaps it was an illusion caused by the proportionally faster field. A pretty good start to the year.